How Do I Run a "Future Search/Creation Conference"

The world is moving from experts solving problems FOR people toward,
everybody, experts included, improving whole systems.

In his book, Discovering Common Ground, Marvin Weisbord described himself as an entrepreneur and author. From 1969 to 1991, he worked as a consultant to business, education, government, medical, non-profit and voluntary organisations in North America and Scandinavia. In 1991 he started Workplace Revolution, a non-profit programme to help people apply the consensus-building ideas embodied in Discovering Common Ground. Other enterprises in which he was involved included: being a partner in Block Petrella Weisbord, a firm established to help people restructure their work; and a partner of Blue Sky Productions, a video company documenting innovations in self-management around the world.
Weisbord (1991, p. xiii) describes his personal mission in life as:

...I have a personal mission. There is a growing world-wide interest in improving the quality of life, at home and at work. I believe that represents common ground for every person living. I would like [Discovering Common Ground] to serve as a catalyst for an informal global support network of people exploring and extending the use of [Future Creation Conferences]. We have a unique opportunity to learn from each other and to amplify one another's processes.
...I hope to encourage concerned leaders everywhere to experiment with [the Future Creation Conference] format. I believe that this mode constitutes a learning laboratory for 21st Century strategic management.

The Minessence Group views itself as part of the envisaged informal global support network - his personal mission is completely congruent with our own vision, i.e. "To create a world where life is meaningful."

[During the future creation conference] we will nearly always find unresolved conflicts and disagreements. We discourage conferees from "working" their differences. Instead, we create a figure/ground reversal. We put the dysfunctional "shadow" dynamics in the background. People don't magically get better than they were. Rather, they tune in on different aspects of themselves - the more constructive and cooperative impulses.Indeed, we neither avoid nor confront the extremes. Rather, we put our energy into staking out the widest common ground all can stand on without forcing or comprising. Then, from that solid base, we spontaneously invent new forms of action, using processes devised for that purpose.In short, we seek to hear and appreciate differences, not reconcile them. We seek to validate polarities, not reduce the distance between them. We learn to innovate and act from a mutual base of discovered ideals, world-views, and future goals. Above all, we stick to business. We make the conference's central task our guiding star. 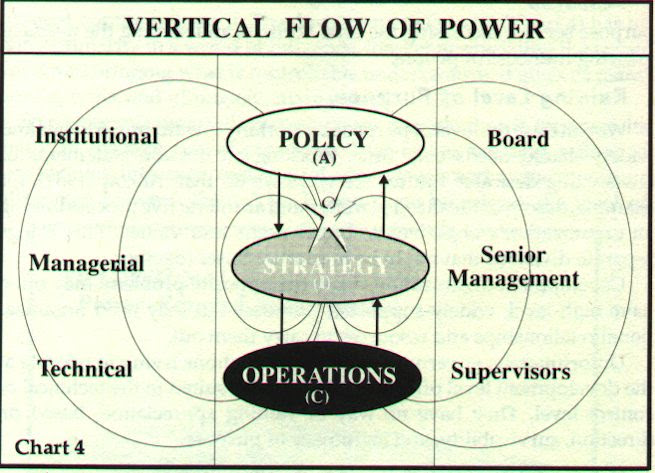 One typically finds the following divisions of power in large corporations:

Smith's future creation conference model is designed to overcome these power differences, and provide each level a chance to influence decision-makers. His model accomplishes this by introducing a horizontal flow of power across the organisation to counterbalance the vertical flow (see the following diagram): 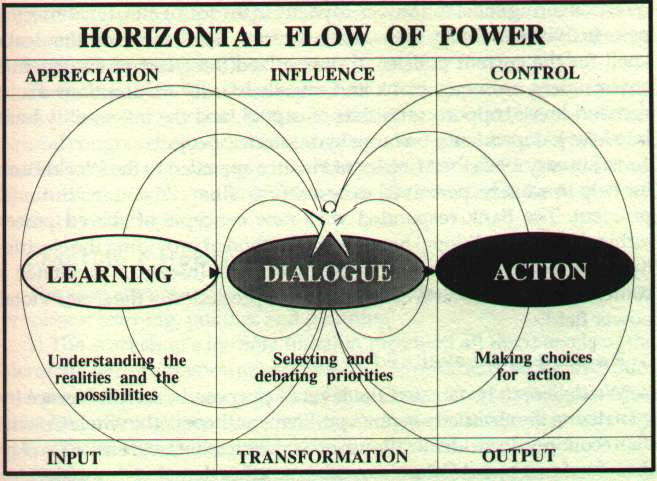 This future creation conference model is designed to take place over three days:

The diagram that follows, depicts the creation conference design described above: 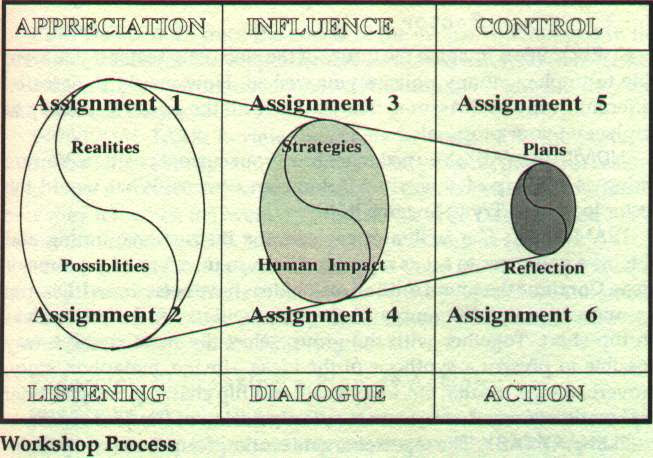 Concluding Comments
We, at the Minessence Group, are keen to link with others in transforming the world into one where the well-being of as many people as possible is enhanced. The mechanistic model of the universe, developed some centuries ago, still dominates the way we treat each other, particularly in the workplace.
People are not machines, robots, human resources or valuable assets. What distinguishes people from machines is values. People have values - machines do not. In order to tap into, and to respect people as human beings, we must be sensitive to their values and design our relationships, teams, organisations, society and civilisation to be in tune with these values.
We believe Future Creation Conferences will make valuable contributions to this much needed  transformation.
Let's finish with some more wisdom from Marvin Weisbord (1992, pp. 8-9):

APPLIED COMMON SENSE: The equation goes something like THE RIGHT TASK + THE RIGHT PEOPLE + THE RIGHT SETTING = UNPRECEDENTED ACTIONS. That sounds a lot of applied common sense. Why, in most institutions, is it not commonly applied? I have to keep reminding myself that the (probably unconscious) function of old paradigm meetings is not breakthroughs, but control.
...To implement effectively we need a shared picture of the "whole system" - future vision, values, policies and procedures in a global context. This calls for broad face-to-face joint planning.
...The outcomes can be quite startling. They range from grass-roots community action to stimulate new businesses and jobs, to revitalising a major company's total quality program, to setting future policy for a national banking system, to making policy for whole nations.

The short answer: "Values motivate, ethics and morals necessarily constrain (because we live in a society, we cannot live our values...